Lulu White was the most famed madam in the Storyville district of New Orleans known as the “Diamond Queen” for her love of extravagant jewelry. Much of her early life remains a mystery, but she was born in Selma, Alabama in 1868, and over the course of her life named Cuba, Alabama, and Jamaica as birthplaces.

She first appears in New Orleans city directories in 1888 and began her career as a sex worker creating pornographic images and prostitution. In 1897, Lulu White established her famed brothel, Mahogany Hall, located in the city’s Storyville district, where brothels were welcomed. Mahogany Hall was known for its lavish accommodations and expensive rates.

Lulu White amassed a lengthy rap sheet during her career for running a bawdy house, bootlegging, and attempted murder, but she only served time in jail in 1918 for violating the Draft Act, which banned prostitution within ten miles of a military base. She was sentenced to a year and a day, but President Woodrow Wilson commuted her sentence after three months. Upon her release, she returned to sex work and running her brothels until her death in 1931.

New Orleans artist Sam Skrimpz, a queer, non-binary painter and muralist born and bred in Louisiana, designed and crafted a billboard, which was mounted in New Orleans. The mural features LuLu White, whose legendary career ended when she fought efforts to racially segregate brothels. #OldProProject

The building that is behind Synamin in the video (Basin Seafood & Grill) used to be the annex for Mahogany Hall, the Octoroon Lulu White was the madam of. It is one of only three buildings that remain from the Storyville era in New Orleans. The other buildings were turned into the Iberville public housing complex in the 1940s.

After Hurricane Katrina, Ray Nagin, the mayor of New Orleans closed the Iberville project despite the buildings not having damage that warranted this. In 2009, the Housing Authority of New Orleans (HANO) proposed to redevelop the Iberville Project into mixed-income housing, which was really just a disturbing way for politicians in New Orleans to demolish 5,000 units of public housing following a devastating natural disaster.

Dr. Charlene J. Fletcher is a historian, womanist, activist, and lover of most things Kentucky, Charlene holds a Ph.D. in History from Indiana University, specializing in 19th century United States and African American history and gender studies. Prior to attending IU, Charlene led a domestic violence/sexual assault program as well as a large reentry initiative in New York City, assisting women and men in their transition from incarceration to society. She also served as a lecturer of Criminal Justice at LaGuardia Community College and an adjunct lecturer in Global and Historical Studies at Butler University. Keep reading…

Landau’s social history of Storyville uses patriarchy as an analytical lens to examine prostitution and gendered racial ideologies shaped sex and the South after the Civil War.

Alecia Long’s work explores sex work in New Orleans after the Civil War to the Progressive Era, dispels romanticized myths of Storyville to draw connections between “geographical segregation of prostitution” and racial segregation.

Several studies of Storyville have been published, yet Arceneaux’s work is the first centered on the area’s blue books – directories of the local prostitutes, saloons, and VD cures – created by the sex workers themselves. Arcenaeaux offers insight into race, gender, and the economics of the sex industry in New Orleans at the turn of the 20th century.

A brief biographical entry on Lulu White and the Storyville district which contains additional images. 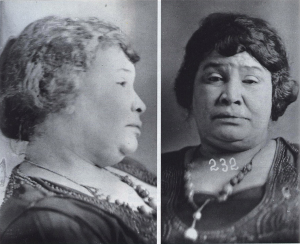